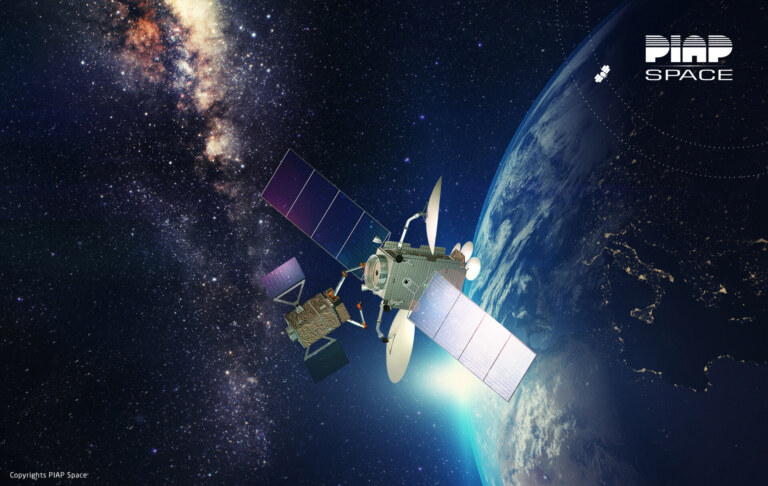 On 14 July, Mateusz Wolski and Andrzej Łucjan – Members of the Board of PIAP Space Sp. z o.o. and Franco Ongaro, General Manager of the European Space Research and Technology Centre ESTEC at the European Space Agency (ESA) has signed a contract on the “Development of Robotic Arm for On-Orbit Servicing” project (TITAN).

The project aims to develop a prototype of a multi-articulated robotic arm for satellite deorbiting and on-orbit servicing. The first stage will involve a design of a laboratory model of an articulated robotic arm, and a prototype including several different types of joints further subjected to comprehensive environmental shaker tests, thermal tests and thermal-vacuum tests. The project aims to reach the technical readiness level TRL6.

“TITAN is a great success of our company that has been in development with a team of subcontractors for almost three years. The project is a key proof of ESA’s confidence, who entrusted the integration of the entire satellite subsystem with the Polish institute. There’s still a huge amount of work ahead of use, but it is an important step in achieving the strategic goals of our company. The TITAN project will allow us to introduce the robotic arm to the commercial market”, says Mateusz Wolski, President of the Board of PIAP Space.

The results of the project will be used in future ESA missions, in the European Union and in the commercial sector. TITAN will allow to service damaged satellites and deorbit the decommissioned satellites that may be a hazard to other objects on the orbit.

There is a synergy between the robotic arm and other products being developed by PIAP Space. An example may include the capture tools for deorbiting, on-orbit servicing and celestial object exploration. PIAP Space, as part of the consortium of seven European partners, is currently participating in the EROSS (European Robotic Orbital Support Services) project aimed at developing a LAR (Launch Adapter Ring) gripper. The project is financed as part of Horizon 2020 – the EU Framework Programme for Research and Innovation under the Grant Agreement No. 821904.

The company takes part in projects in the frame of Strategic Research Cluster on Space Robotics Technologies  (PERASPERA), of which the Polish Space Agency is one of the members. For this reason, “Polish companies, including PIAP Space, have easier access to international contracts in this area”, says Michał Szaniawski, President of the Polish Space Agency.

Space strategy on the European scale

PIAP Space is a spin-off company established in 2016 by the Łukasiewicz Research Network – Industrial Research Institute for Automation and Measurements PIAP. The company is involved in development and commercialization of robotics in space technologies. The company specializes in on-orbit and planetary robotics, satellite manufacturing equipment and satellite mechanics. Since 2019, PIAP Space has been owned by Łukasiewicz – PIAP and the Industrial Development Agency owning 44% of the business. “The success of TITAN project developed by PIAP Space shows a growing position of the company in our portfolio in the Polish and European space sector. By investing in PIAP Space, the Industrial Development Agency supports Polish economy within the innovative and promising industries of the space sector. It is estimated that the global space robotics market will reach USD 3.5 billion in 2025. On-orbit satellite servicing and disposal of space debris will contribute to the development of “new space” – commercialization of the space sector. It will not only affect the development of Polish and European economy, but also improve the quality of life of European citizens with cheaper and more reliable satellite services”, says Cezariusz Lesisz, President of ARP.

“TITAN project is a huge challenge”, adds Piotr Szynkarczyk, Director of Łukasiewicz Research Network – Industrial Research Institute for Automation and Measurements PIAP. “Difficult, practically impossible to recreate on the Earth operating conditions of robots for extra-terrestrial operations are the test of scientific knowledge and available technologies. Creating a new class of robots operating in space – a non-human friendly environment – is the main goal of PIAP Space. I’m glad to witness the shift from the first preparation stage to the product development stage – developing a robotic arm satellite subsystem”, says Piotr Szynkarczyk.

Piotr Dardziński, President of Łukasiewicz Research Network says that the ambition of the network is to become a leader in space sector and reinforce the position of a valued supplier of solutions for the industry. “Projects like TITAN – challenging, carefully planned and carried out on an European scale – are a path to success. Congratulations to PIAP Space on their success. I’m glad that we can share it as part of the organization and use the experience of Łukasiewicz – PIAP in creating a company build on the scientific achievements of the Institute” adds Piotr Dardziński.

More information on PIAP Space projects, products and services are available at: www.piap.space.