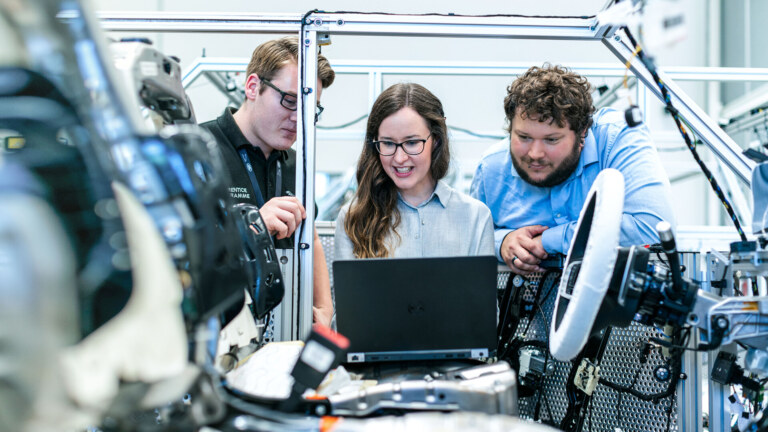 How can SMEs and companies starting to operate make progress in digital transformation? Thanks to the EIT Manufacturing project in which Łukasiewicz – PIAP is responsible for the advisory component, over a dozen enterprises from six EU countries obtained the aid, including two companies from Poland.

Digitization of manufacturing and management processes may considerably help small and medium enterprises to cope with periodic crises, as well as prepare them for post-crisis changes. The consortium of institutions involved in the EIT Manufacturing project “RIS Industry 4.0 Hubs” took up an initiative in the form of specialist seminars and targeted grant support for European SMEs to back them up in digitization of their manufacturing processes and supply chains. The objective of Łukasiewicz Research Network – Industrial Research Institute for Automation and Measurements PIAP, which participates in the project, was to include Polish companies in the project. One hundred companies in six countries benefited from the individualised seminars, and 14 received direct support and consultations.

Amongst the Polish companies which benefited from the advisory services in the field of digitization was the Warsaw-based Blokado company, specialising in parking systems. “Together with experts, we managed to define our needs in designing a new production line and assessing digital maturity of our operations. We received a solid digital roadmap pertaining to the subsequent steps in order to fill the technological gap and invent potential solutions for digitization of our products,” said Artur Foksa, President of the Management Board of Blokado.

As part of the EIT Manufacturing project “RIS Industry 4.0 Hubs” (RIS I40H) Łukasiewicz – PIAP along with six other European partners implemented the so-called Regional Innovation Scheme (RIS) to increase innovative capabilities and transfer good practices in European countries that are considered to be “modest and moderate” innovators. SMEs are encouraged to use digital technologies and to improve their skills and digital competences. With this in mind, the project team organised a series of seminars in Poland, the Czech Republic, Lithuania, Slovakia, Estonia and Greece. The project also provided support for industrial beneficiaries via an open contest in which companies could apply for mini-grants and obtain consultations in the field of digitization or digitalization planning.

“ As part of the 12-month RIS I40H project, coordinated by BIBA at the Bremen University in Germany, our team applied a three-degree methodology which helps SMEs to implement Industry 4.0 solutions based on digital technologies,” said Krzysztof Lipiec, director of the Commercialization Department of Łukasiewicz Institute – PIAP. In the first stage, interactive seminars with a proven structure and contents were organized, which served as the introduction to Industry 4.0 technologies for SMEs and aimed at preliminarily examining digital competences of small and medium enterprises. Seven seminars, held in six countries, were attended by more than 100 participants. In the second stage, individual consultations and in-depth assessments of digital maturity of companies’ activities were ensured to orient enterprises towards areas of priority for digitization. The third step included creating a specific roadmap for individual companies, which was supposed to indicate how individual stages of digitalization should be implemented.

“ In such difficult times as we have today, industrial companies postpone the aforementioned actions for later although they believe that they are necessary for digitization of their business. Therefore, as a result of an open contest financed by the EIT Manufacturing, we supported 14 SMEs by means of mini-grants,” added Krzysztof Lipiec.