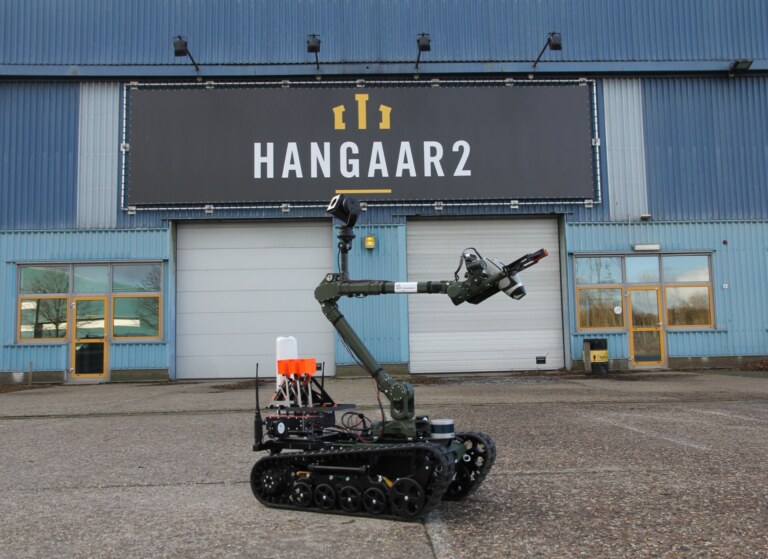 Engineers from Łukasiewicz Research Institute – PIAP are among the five finalists in the competition organized by ESA and ESRIC. Its main idea is to propose and test the robotic system for raw material reconnaissance on the Moon to enable future exploitation of extra-terrestrial resources.

Engineers from Łukasiewicz Research Institute – Industrial Research Institute for Automation and Measurements PIAP created a mobile platform weighing 100 kilograms and designed for visual reconnaissance of terrain. For this purpose, a special version of the robot was developed on the basis of PIAP Patrol platform. The robot was submitted into the Space Resources Challenge competition in July 2021. After passing the selection stage, engineers from PIAP joined a group of 13 institutions from Europe and Canada to participate in the next stage of the competition, which took place in November 2021 in the Netherlands. On a test track imitating the moon-like environment specially prepared by the ESA, in a given time they were to get through an obstacle course in the terrain and collect data on as many interesting geological structures as possible.

After evaluation by the selection board, Łukasiewicz-PIAP engineers were among the five finalists who will receive funding for improving their solution and test themselves again in a similar test, in September 2022. The final winner will be given the opportunity to further advance the technology and become part of the ESA supply chain for future moon exploration. We can observe how robots perform their tasks related to searching the unfriendly environment. This robotics application will be the foundation for future exploration of the Solar System, and European entities may perform a significant role in that task. The mere participation in such an undertaking is the dream of every engineer,” explains Piotr Szynkarczyk, PhD. Eng., director of the Łukasiewicz Research Network – Industrial Research Institute for Automation and Measurements PIAP.

The tests as part of the current stage of the competitions were carried out on 22-27 November 2021 in Noordwijk, the Netherlands. “We did not know what terrain our robot would have to overcome and what could cause him trouble. Therefore, when we reached a key part of the track and saw in the cameras the traces we left on the tested surface, we felt like real explorers. Now we would like to definitely improve our result,” says Jakub Główka, head of the department where the preparations for the competition were carried out.

The other finalists with whom Polish scientists will compete are mostly well-known research centres specializing in space programs.

The Polish rover taking part in the competition is equipped with specialized cameras and a tracked wheeled drive system ensuring increased mobility on uneven terrain, and a multi-functional manipulator. It also uses additional sensors and an autonomous control system, so as to perform the entrusted task as efficiently as possible with a total delay in the control system of more than 5 seconds. Sc.D. Łukasz Kruszewski from the Institute for Geological Sciences of the Polish Academy of Sciences, an expert in the field of geology, also participated in the project. The key to a successful operation with the robot was the use of experiences and solutions collected and developed in previously implemented European research projects in the field of robotics.

We wrote more about the competition here.

A video showing the course of the competition first stage can be viewed here.